My thoughts about Kazoku Game

Well, before KG starts, I wrote difference between the Movie and dorama version. After dorama was finished, I wrote my opinions as draft... and now want to post it. There were any main points in the movie which still keep such as in the movie version, although  has been modified in dorama  version.


1. Shigeyuki's scrore was rising
Both two version,  I love Shigeyuki's expression when his score for any lessons was rising in the class. He was so happy, and... hahahaaaa... and ex-his best friend, Sonoda (the movie version) or Tshuchiya (dorama version) was jealous even also shocked.


2. Shigeyuki passed exam to high school.
Somehow, the main story about the main goal of Yoshimoto teached Shigeyuki was accomplised both in two versions.


3. The reason Shigeyuki became at enmity with Sonoda or Tsuchiya
Actually Shigeyuki and Sonoda/Tsuchiya were best friend since elementary school. All moments, good and bad, has been around them. One reason their friendship broke up because Shigeyuki got an accident at their class of elementary school. Then, seems that Sonoda was embarrased with what happened to Shigeyuki till no want to be his friend anymore.

Movie--> Shinichi told this reason to Yoshimoto in Shinichi room. And the accident was about Shigeyuki pooped in the class. There wasn't any scenes about that accident at the screen of the movie.
Dorama--> Through narration, Shigeyuki himself who told that he hate Sonoda. And the reason, it was shown by the accident when  Shigeyuki was sitting and there was urine in his seat. I wasn't sure wether he pooped or not. He was only pee or also pooped ne ~ LOL


5. A mess in Numata family
But yeah, had difference with the reason to rag LOL
Movie--> All members Numata family, included Yoshimoto, raged at home because of got a drunk after celebrated Shigeyuki who passed exam to enter high school.
Dorama--> Without Yoshimoto who just went out from home, all members Numata family raged at home after father went home and said got a fired. With all the problems that occurred previously, they fight. Got out of control.


6. Shinichi drop out/quit of high school
Movie--> While dinner together, of course Yoshimoto joined in, Shinichi told to everybody that he wanted to quit school. He didn't say anything about the reason. He just said he had his own thoughts about his future. No scene about he had quit. He just said it. That was it.
Dorama--> Seems that Yoshimoto was the person who pushed Shinichi to quit from school. In Shinichi room, Yoshimoto said about quit from the school till Shinichi was a bit annoyed to him. And yeah, with what happened when Shinichi, mother, Shinichi's teacher and Yoshimoto in the class room, no wonder if Shinichi drop out of the school ne ~ Yoshimoto really pushed Shinichi with all his words till Shinichi's teacher couldn't talk a lot.


7. Girl who loved by Shinichi
Movie--> Shinichi loves his classmates, but that girl loves the other hahahaaa ~
Dorama--> Shinichi had girlfriend who his classmate, Asuka. Sadly they broke up because Shinichi felt in love with Asami (or actually her name was Sara). But seems that they were together again. At the bus school, Shinichi asked her whether she would like to go out (have a date) together again or not ... and... of course Asuka agreed.


8. Bullying scene
Movie--> When Shigeyuki got bullying, the background was rather dark, afternoon after school, not too clear to show the bullying scene. And I really appreciate for this.
Dorama--> Gosh! Every bullying scene was too clear! So brightly! To be honest, I really didn't like it!!! May be I'm a strange person, but trully, a bit little sadistic for me. Not good to watch bullying scenes.


And then, 4 points that I paid attention a lot in dorama version: 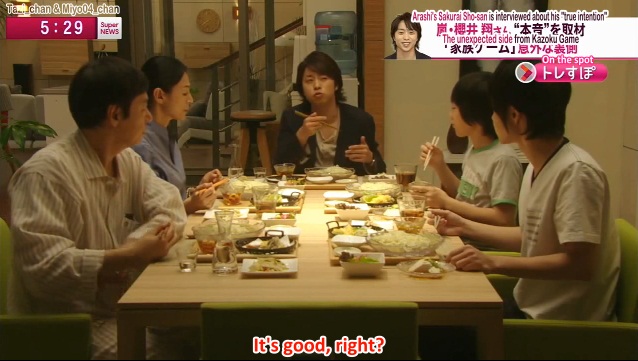 Ah! In the movie version, Yoshimoto & Numata family was sitting in a row and Yoshimoto was in the center. 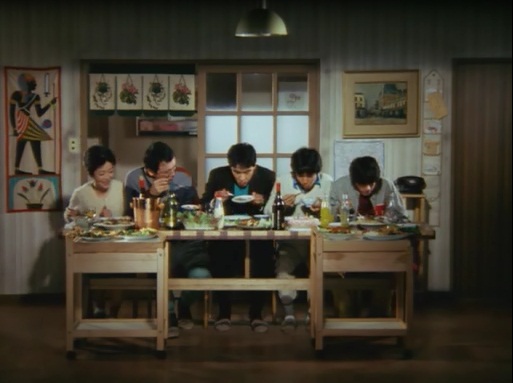 3. The leading character was Shinichi
In my eyes, the one who leading character was Shinichi, not Yoshimoto. Oh please, don't blame me, Sho-kun because I said this! LOL  Kamiki really got a big portion to appear on the screen as Shinichi. But it's not only about the appearance portion. With Yoshimoto's past, Shinichi tried all his best to open Yoshimoto's identity. I though Shinichi looked like a detective who solved the tutor's mystery. And as wacther, our curiosities were represented by Shinichi, right? Usually, in movie or dorama, people who did such as detective to solve the mystery was the leading actor, right? LOL Also don't blame me if I said that this dorama version was a bit far away from the movie that really focus about tutor and his student. Of course I like this dorama, really like it with all the problems... but it's no problem ne if I said these kinds of things.


4. The reason Yoshimoto becames the scary tutor
Once again, may beI'm strange but I didn't like with the story about Yoshimoto's past. His student, Sanada, commited suicide 8 years ago till Yoshimoto became scary. The real Yoshimoto & two teachers bullied Sanada and did someting to to Sara, his classmate. What sadistic teachers!!! Really sadistic! Even seems that two teachers were afraid to real Yoshimoto and just followed his instructions, but.. how can three teachers did those kind of things to their student?! Gosh!!! I know may be there's any sadistic teachers in real life in the world, but I didn't like it to bring it into dorama version. Why the script-writer didn't write the other story about Yoshimoto past?

After all, everybody has a different thought... and above were my thoughts. Of course there were still any points but above (8 points and 4 points were enough LOL) In the end, once again, I bet there will be the sequel or SP...  and I wondered, should Yoshimoto still called as Yoshimoto? Because actually he's Tago Yudai  ~

Actually Kazoku Game was really so famous ne... I just know that actually at the past, not only Kazoku Game The Movie (Family Game) but there were also two SP (lead actor of Takeshi Kaga) and two doramas (season 1 and season 2, lead actor of Nagabuchi Tsuyoshi). But because of all those were sooooooooo old dorama/SP, I don't find the RAW. May be I wan't too detail in searching because in hurry LOL

By the way, I often compare if there's any dorama/K-drama/Thaiwanese drama/Chinese drama  which fadapted into or adapted from the movie or SP.  Just for my references LOL For example, I prefer the movie version of Honey & Clover than dorama version. Prefer HYD than Meteor Garden and Boys Before Flowers. Prefer Itazura na Kiss than It started with Kiss and Palyful Kiss. I prefer Maou than The Devil. Prefer Yamada Tarou monogatari than Poor Prince Taro.