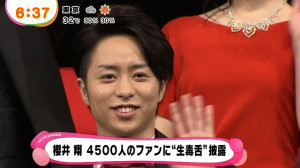 Don't blame me to said it, Sho-kun! I prefer you with normal hairstyle like this one. Very natural & somewhat longish. Look so manly & gentle ~ 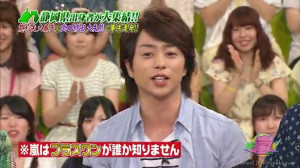 And then... in the press confrence to promote NazoDi the movie, till now, I'm still confused & can't figure out about holding hands each other between him & Keiko. 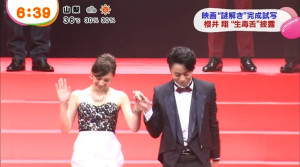 
And... yesterday, Sho-kun just arrived in Singapore, so near to my country. Around 1,5 in flight. Last Monday, asked to people in traveling company that usually take care tickets for my company's business trip, to help me about ticket Jakarta-S'pore & S'pore-Jakarta. No ticket anymore for this weekend, even just for one day of Sunday-July 27. The funny thing, not too disappointed! Not try to look for ticket at other traveling companies or agents. May be I'm a bit little lazy to go abroad this month because is fasting month for Moslem, and of course I have to fasting ^_^ Besides, I thought that no have any chance to be able to see Sho-kun. Impossible to came to gathering-media *just for media, right?*, premiere *so difficult to get movie-ticket*, or special event with Sho-kun & Keiko *just for citizens of Singapore*.


But it's OK since within these 2 months, I'm surprised a lot & such flying in the sky. 4 football team came to my country to macth our national football team. 4 Big teams! Who doesn't know Netherlands national footbal team, Arsenal,  Liverpool & Chelsea ne? Couldn't believe it that they were willing to come here. Even I'm not their fans, but didn't want to miss it. Though being in the annual audit at the office, didn't prevent the intention to go to see the match. No matter all matches were started at the night and after finished, even in late night, returned to the office for overtime regarding the annual audit.


By the way also lost in three previous matches. First, with Netherlands, lost 0-3, but who care as long as I saw RVP (Robin van Persie, MU), Robben (Arjen Robben, Bayern Munich) & Sneijder (Wesley Sneijder, Galatasaray). Oh yeah, RVP! MU! After Netherlands, 3 clubs in Premier League came. Arsenal. Liverpool and Chelsea. Sadly no MU :(( Same years ago, MU would come but cancelled regarding the bomb in the hotel which will be used for their staying during here.


And then.. with Liverpool, lost 0-7. Gosh!! Too bad. But couldn't express my feeling to see Steven Gerrard. For me, he such a legend in soccer, even not too famous like CR7 & Messy.


With Arsenal? Lost 2-0! But no problem, because love to see Arsene Wenger (coach) & Jack (Jack Wilshere). I touched to hear the reason why Arsenal came to here. Arsene said that when Arsenal came to Malaysia last year, they saw and met many Indonesian fans who travelled from Indonesia to Kuala Lumpur just to see them. At that time, he knew that they had to come to Indonesia.